The Venetian Arsenal is a shipyard located behind Gouvia Marina on the east coast, just 8km from Kerkyra town. The shipyard was used to service the Venetian fleet of ships that were stationed in Corfu.

The Venetian Arsenal was built around 1778 and was supposed to be used for to repair the Venetian ships but Venice limited it’s use to simple maintenance, it’s usage declined until it was decommissioned just 20 years later in 1798 when Venetian rule of Corfu came to an end. The shipyard consists of three arched docks that remain largely intact but without the roofs and an entrance gate. The shipyard was also used as a base for the French in 1917 and 1918.
Unfortunately there hasn’t yet been any attempt to restore the site or turn it into a tourist destination so you can’t get in and look around as it’s surrounded by metal fencing and there are no signs with information, the grass isn’t cut regularly but it’s still an interesting place to visit.

Getting to the Venetian Arsenal is easy as you simply head for Gouvia and then follow the signs, there’s parking available on the roadside around the modern marina and then you can simply walk north up the coastal road until you reach the Arsenal.

Where is Venetian Arsenal 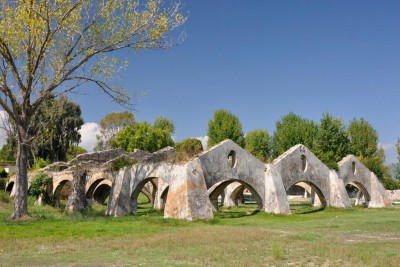 No Reviews Yet
Unfortunately we don't have any reviews for Venetian Arsenal, if you've been, why not be the first.
If you would like to share your thoughts on Venetian Arsenal with our visitors then please fill in the form below to send them to us.

We want Which Greek Island to be as accurate and informative as possible, so, if you notice anything wrong with this listing about Venetian Arsenal or any other page please let us know.