Santorini is actually a small collection of islands formed from a single island where a volcanic eruption destroyed the middle and left the now semi circular main island of Thera the second largest island of Thirasia to the north west, 2 small islands in the centre called Nea Kameni (the larger of the two) and Palea Kameni as well as the tiny island of Aspronisi in the south west below Thirasia. This kind of Geological formation is called a caldera and Greece has another island with a caldera, this is on Nisyros which is part of the Dodecanese group.

Santorini is in the southern Aegean sea, it's the most southern of the Cyclades group and has a unique character given to it by the volcanic rock that forms the islands. Santorini has many black sand beaches and also a red sand beach

When you think of picturesque Greek white wash villages or multicoloured pastel villas perched on the mountainside you are thinking of Santorini, this is a gorgeous romantic island that should be on everyone’s list of places to visit.

How to get to Santorini

Getting to Santorini is easy, it has it’s own airport on Thira and there are regular flights throughout the summer from most major UK airports. The airport code for Santorini is JTR and the flight time is about 4 hours.

The best time to visit Santorini is from late April to early September, it rarely rains and sunshine is virtually guaranteed. If you like it really hot then July or August are your best months, it will likely be in the high 20s, you’ll enjoy 13 or 14 hours of sunshine per day and only see an average of 1mm of rain all month so you won’t need your brolly.

It’ll be slightly cooler in the months before or after but this can be perfect for some people, you still wont get much rain but the hotels and restaurants will be quieter.

Who would enjoy Santorini

Santorini is the ideal holiday spot for couples, whether that’s getting married out there, having your honeymoon on the island or just a romantic getaway. The hotels with Caldera views are the perfect place to relax and watch the world go by with that special someone. It’s hard to recommend Santorini for kids as there’s no great sandy beaches and not a lot to keep them entertained.

Where to stay in Santorini

The most popular places to stay are on the caldera side of the island like Fira, Oia, Firostefani and Imerovigli. However because they are so popular they are also expensive, particularly if you want a good view and a private hot tub. An alternative option is to stay out by the black sand beaches of the east coast in either Kamari or Perissa. The only problem there is you don’t get the views without making the tip over to the west coast. If you're looking to find somewhere to stay in Santorini then start here. The Santorini resort guide tells you all about the towns and villages on the island with descriptions, photos and quick look icons to show you what amenities are available at each. Although Santorini isn't blessed with the best beaches in Greece you may want to take in the unique black volcanic sand and stone beaches at some point and the Santorini beaches guide will help you to find the ones that suits your needs best.

Santorini has some fantastic archaeological sites and museums as well as other entertainment like boat trips and beautiful churches. To find out more go to the Santorini sight seeing page and find out what's on the islands to keep you busy. Skaros Rock by Christopher Down 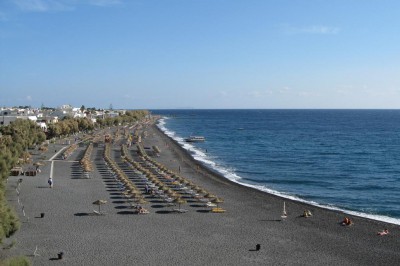 Ancient Thera by Ernest McGray, Jr.
If you have photos from Santorini that you'd like to share then please use the form below to send them to us. Thanks!

No Reviews Yet
Unfortunately we don't have any reviews for Santorini, if you've been, why not be the first.
If you would like to share your thoughts on Santorini with our visitors then please fill in the form below to send them to us. We want Which Greek Island to be as accurate and informative as possible, so, if you notice anything wrong with this listing about Santorini or any other page please let us know.