Ancient Thera is found between Kamari and Perissa and sits at the top of mount Messavouno and around 20 minutes drive from the islands capital Fira.

The site is the ruins of an ancient city that was built in the 9th century BC and abandoned in 726 AD. It’s been excavated since 1895 by various archaeologists and some of the artefacts found can be seen at the museum of prehistoric Thera in the capital.

The site consists of a main road that’s almost a kilometre long and side streets with many large buildings, residential areas and even a theatre too.
The opening hours at Ancient Thera are usually from 8.30 to 15.00 everyday except Monday but please check before going as times vary depending on season. Admission is about 4€ and as you are out in the open and on top of the mountain with minimal shade it is recommended to try to avoid the hottest parts of the day or at least take some water with you, particularly as there is a bit of a walk up a steep path from the road to the site.

Another plus point to Ancient Thera is that once you’ve seen the historical site you still have wonderful views as you are so far up the mountain that you can see all of Perissa to the south and Kamari to the north.

Where is Ancient Thera 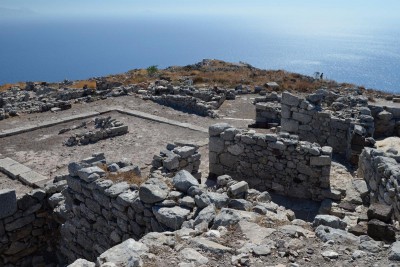 Ancient Thera by Ernest McGray, Jr.
If you have photos from Ancient Thera that you'd like to share then please use the form below to send them to us. Thanks!

No Reviews Yet
Unfortunately we don't have any reviews for Ancient Thera, if you've been, why not be the first.
If you would like to share your thoughts on Ancient Thera with our visitors then please fill in the form below to send them to us. We want Which Greek Island to be as accurate and informative as possible, so, if you notice anything wrong with this listing about Ancient Thera or any other page please let us know.